STORIES FROM OUR MEMBERS 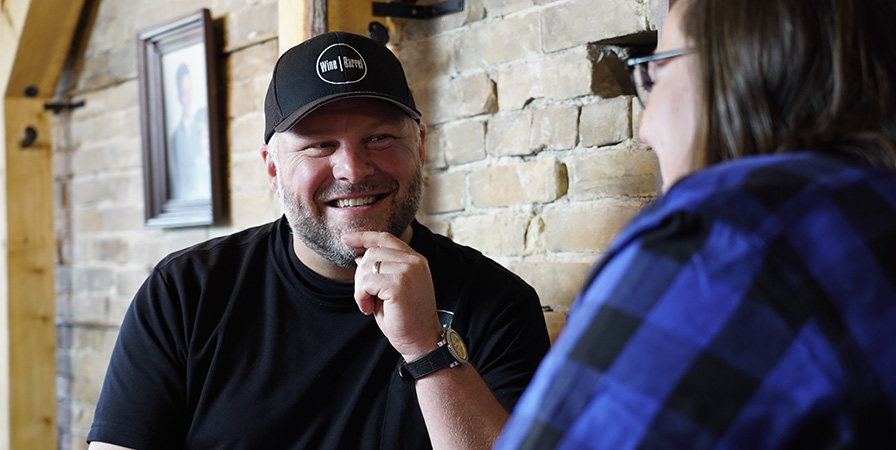 We reached out to so some of our members to share their stories and experiences with Northern Credit Union. We were so thrilled with some of the responses that we had to share them with you.

Elizabeth (Liz) H. is a retired high school teacher and proud resident of the northern community of Red Rock, Ontario. When the papermill shut down in Red Rock, her other financial institution packed up and left but Northern ‘stuck it out’, as Liz put it, a fact that she said she’ll forever be grateful for.

“I love banking at Northern because they are my community financial institution. I know the gals who work there. I try to not use the bank machine too often even just so that I'm showing the powers that be that real people are really appreciated. To me it makes all the difference in the world to have community members, who know me and know my financial needs.”

Liz also shared a wonderful story about her mother, who was 97 years old at the time. During the snowy northern winters, she would bring her mother supplies, like milk, bread and groceries. Her mom, who wasn’t able to get to the local branch in the snow, would often offer her a $5 cheque for her troubles, which Liz would always refuse. One day, Liz showed up and her mom offered her $5 in cash and Liz said, ‘Ma, where did you get this? It’s 40 below outside!’ To which her mom answered, 'No, I called the credit union and one of the gals on her lunch hour brought me over some money.'

“That just wouldn’t happen in a big city or a bigger institution,” said Liz. “The whole sense of community and support that we get as members of the Northern Credit Union in a small town, I don’t think you find too many places these days.”

Another member we heard from was Kevin M. Growing up, he spent a lot of time at his grandparent’s family farm, near Cargill, Ontario. He has many fond memories of that time, playing around the farm, going to town to return pop bottles for $0.10 and buying some candy at the local store. Eventually, he moved away for college and later becoming a university professor. But he always remembered his time and Cargill and felt a strong connection with the town.

More recently, he renewed his interest in Cargill, diving into its rich history and writing a book about Henry Cargill, the namesake and founder of the town. But when Kevin visited Cargill, he found that many of the historic storefronts were empty or abandoned. At that point, he started to wonder what it would be like to buy one of these historic buildings and restore it to its former glory.

He put together a detailed business plan for the project, which involved purchasing and renovating a historic storefront property on Cargill’s main street, as well as two residential apartments. The main challenge was financing. At first, he tried the big banks but was bounced around between the different departments and eventually turned down. Then someone suggested Northern Credit Union. They took the time to understand the project, Kevin explained. They came out to the site, met the different people involved and eventually approved the financing.

“They really felt like part of the community we were working with on this project. I would definitely recommend Northern Credit Union for anyone involved in a project like this in our local community. Something that might be a little bit non-traditional, that has a positive impact on the community as part of the broader business plan. Northern Credit Union really understood that and have been supportive of this project through the whole journey.”

We also heard from the folks down at Broers Jansen Wine Bar and The Wine Barrel in downtown Sault Ste. Marie, Ontario. They came to Northern looking to expand their business. At the time, they owned The Wine Barrel, a ‘you-brew’ where people can make their own wine and beer. The issue they were facing was that customers weren’t legally allowed to try the wine they were brewing in the self-brewing environment. So, the business plan was to open the adjoining Broers Jansen Wine Bar, where customers could taste test the wines before committing to 30 bottles of a particular vintage.

“Most of the big banks, if not all said they weren’t able to help us,” said Josh Jansen, co-owner of Broers Jansen and The Wine Barrel. “But NCU was able to step up and provide the support we needed through the form of credit line, Visa and many other benefits as well.

“This might sound cheesy,” Josh continued. “but it actually does seem with Northern - the people that we deal with have an actual interest and care in our business. They actually seem interested in what we’re doing, and whether or not we succeed. Whereas, when we deal with other banks, you really do feel like just a number. We don’t feel like a number with Northern. We feel like Northern’s people.”

— Josh Jansen, co-owner of Broers Jansen and The Wine Barrel

We’re always overjoyed when we hear stories like these from our members. Seeing the positive impact that we’re able to make in our local communities really makes all our hard work worthwhile. If you have a story to share, we’d love to hear it too. You can send it to us at marketing@northerncu.com.